This was the first 4th of July that I ever spent out of the country, as well as one of the best ones I can remember from recent years. Not being there isn’t a super big deal, but it definitely brought out the patriot in me. For example, there was a time period of about 35 minutes yesterday where all I could do was think about hamburgers and grilled corn. If that doesn’t make me American I don’t know what does!!! (half joking). I compensated by wearing a blue skirt with a red and white striped shirt. Coral and white, but close enough. Vive la France!! Or England! Or Norway! Or Australia! Jklolz the intended country was America. Here is a selfie of me!! Being slightly toolish but very proud. 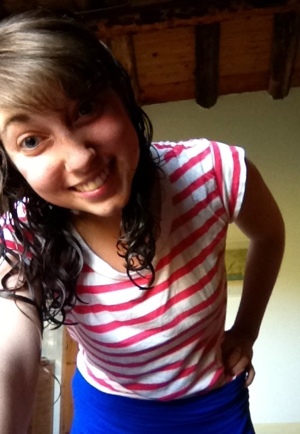 Now that that’s over with, on to how I spent the day! I woke up around 8:30 and went for a hike around here (the village is called Arethousa, I don’t know if I’ve ever mentioned that) with Anna, Vilda, and Michalis. It was really pretty, and not too difficult because we basically just went down the mountain, but there were a lot of pricky branches, like before. Also like last time I forgot my pedometer and was quite sad. We got back around 11 and then Anna and Vilda and I went to the beach, the same one as yesterday. The water was so clear and it was a wondrous swim. We talked to a woman who was there with her son for a little before leaving- another example of how nice people are here and how willing to talk they are.

I was super hungry from all this physical exertion so I had lunch when we got back, did the crossword which was fun and Pixar themed, and then napped for a couple hours. Afterwords, I went for a run, and by accident went a lil too far because walking back up the mountain was a super arduous task.

Then in the evening we had a “cooking lesson,” aka we all just cooked together under the instructions of Michalis. This was my favorite thing we’ve done, the best meal we’ve had, and one of the reasons why this was my favorite day so far. We made a lot a lot a lot of food- a traditional Ikarian dish that’s basically like ratatouille, or a similar Italian thing that my mom makes- vegetables (we used eggplant, potatoes, squash, onion) with tomatoes, oil, and spices. We had Ikarian oregano, which smells so different compared to normal canned oregano. We also made black eyed peas (literally the E.N.D. for them amirite) (terrible joke) with onions and oil and marathon, an herb that is really pervasive here and smells really good. The taste is like the smell that’s all over the island, which is weird because the actual smell isn’t. We also made a sausage and peppers-esque dish, a traditional Greek salad, and tzatziki, accompanied by delicious fresh bread, Ikarian white wine, and traditional Greek music. For dessert we made halva, which was just oil, semolina flour, raisins, sugar and water. The food was all absolutely excellent. And many hands made for light work! We just had to wait for it to cook, in which time we sat and talked and enjoyed the company and music. Michalis wanted to hear some of Vilda’s Norwegian music, and then I played some Zac Brown Band, which really hit the spot for any America cravings. So all in all- I had a truly wonderful day, and am super content 🙂

On another note…I just dropped my retainer in the toilet bowl. Clean water, but still. My response= stand there staring, and then looking for something like salad tongs so I wouldn’t have to get my hand wet. Salad tongs. In the bathroom. Not a thing in Greece or probably any normal household in multiple countries. I eventually just reached in and got it but WHAT DO I DO NOW is it gross if I put it in my mouth ever again?? I’m gonna have to endure serious mouth pain if I wait til August to wear it again. The woes of life.